Pontiac achieved racing success with the Pontiac LeMans Super Duty when it won the 1963 American Challenge Cup in Daytona. The race was run on the oval and contested in a driving rain storm by a small but eclectic mix of cars which included a number of Ferraris, Porsches and Corvettes. Reports published at the time indicate the car was equipped with a dual four barrel equipped 421 CI engine (6.9 liters), a four speed semi-automatic transaxle and aluminum bodywork.

The car’s luck ran out the next day when Goldsmith completed only three laps of the Daytona Continental before retiring with what was reported as a fuel pump failure. Subsequent interviews with Goldsmith and Nichels gave the reason for the DNF as a driveline failure.

From here the car’s history becomes murky at best. GM would reiterate its support for the AMA racing ban in early 1963 and a number of GM’s racing programs were shut down, including this one. Number 50 would be offered for sale and eventually be sold to Mercedes Benz in Germany for use in a competitive analysis. One memo exists detailing the results of a preliminary analysis by Mercedes. From there, the trail goes cold.

Among the questions to which we need answers are: 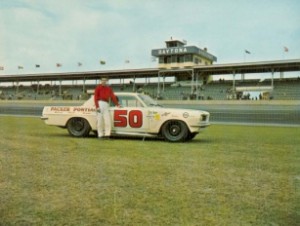